Magnetotellurics (MT) is a passive geophysical method for estimating the electrical properties of the subsurface. The MT method uses variations in the natural geoelectric and geomagnetic fields as the source of energy.

In the field, electrodes are used to measure potential difference variations in the x direction (Ex) and y direction (Ey). Induction coils measure variations of the geomagnetic field in the x, y and z directions (Hx, Hy and Hz respectively). Commonly, x represents East-West and y represents North-South, though only orthongonality is really required. The vertical direction is represented by z. 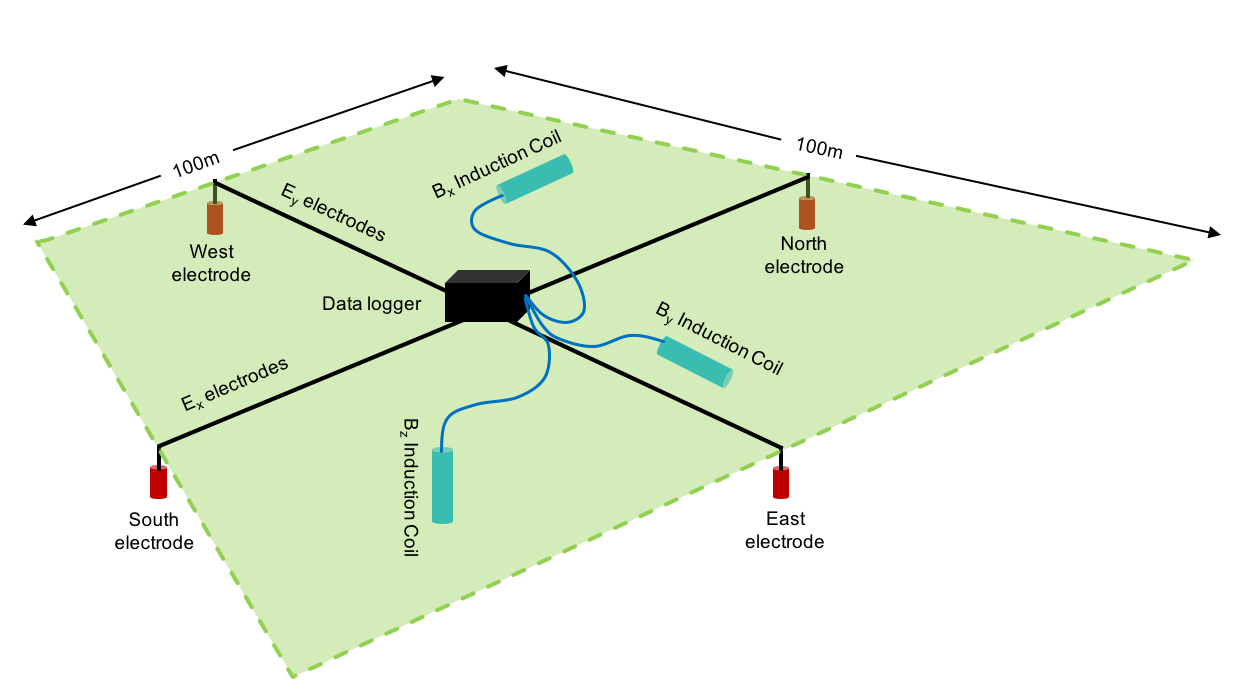 An example magnetotelluric setup in the field¶

There are several assumptions made for magnetotellurics. For a clear outline of these assumptions, please see the following references:

Magnetotelluric processing is the task of taking geoelectric and geomagnetic field values recorded in the field and estimating the impedance tensor or tipper. The overarching aim is summarised in the below image.

The aim is to take magnetotelluric time series data and from it, calculate the apparent resistivy, phase and other parameters¶

The general resistics workflow to estimate the impedance tensor or tipper is shown below. There are two important steps:

The time series data is windowed to have more samples in the linear regression problem. For the windowing, resistics has default parameters. However, users can specify different windowing schemes to either reduce or increase the number of windows available.

Transfer functions could be (and can be using statistics) calculated out for each time window individually. Alternatively, one estimate of the transfer function can be made by using the equations from each and every time window to give an over-determined linear regression setup.

In addition to the basic workflow, resistics has more functions to select or reject time sections. The expanded workflow is shown below.

Using statistics and masks allows users to reject time windows that do not meet a specificed set of constraints. Further, the time windows to use can be selected by defining a time range. For example, it is often beneficial in eletromagnetically noisy environments to select time windows during the night when cultural electromagnetic noise might be at a minimum.

Adding decimation to the processing workflow¶

The apparent resistivity, phase and other parameters are generally the first step on a longer journey to model the electrical resistivity of the subsurface. This can be done using either a 1-D, 2-D and 3-D inversion depdending on the number of measurements and their orientation.

To install resistics, follow the instructions in the installation.

Resistics is a project based package, which means the first step in learning how to use the package is to set up a new project and place the time data files in the appropriate location.

In the tutorial examples, the first line will usually be an import of datapaths. For example, in the script to create a project.

This is purely to help separate the tutorial data from the resistics repository. The datapaths defined in datapaths.py are shown below.

In most example cases, the images will neither be saved or shown, and the figure will be saved explicitly. This is to help the documentation process. Usually, the best way is to use the save option when viewing images to save the images to the project “images” folder. For example:

In the above code snippet, the save option could be set to True to save the image to the “images” folder. Then the explicit save would not be required.

A dataset has been made available for new starters to practice with. This includes two recordings, one at 128Hz and the other at 4096Hz. The dataset is available here:

In most cases, only the API for the project functionality will be of interest. However, for even more advanced examples, have a look at the advanced and cookbook sections, which will demonstrate more advanced processing of magnetotelluric data or usage of lower level resistics API.