Another preprocessing method of use, but not available within the preProcess() method is gap filling. This can help increase the number of windows at long periods.

In addition, there are lower levels APIs for performing these actions for advanced users. Please see the API doc for more information or check the Cookbook.

For plotting the time data, different plot options are used to give larger fonts. Plot fonts have been defined as follows:

Resampling time series data might be required to ensure matching sampling rates between different datasets, for example a local site and a reference site. This can be achieved through the resampling option in preProcess() method which can save the data either to the same site or to a new site altogether.

Below is an exampling of downsampling a 4096 Hz dataset to 1024 Hz. The output will be saved to a new site named “site1_resample”. If the site does not already exist, it will be created. The name of the measurement in the new site will be:

These produce the following plots: 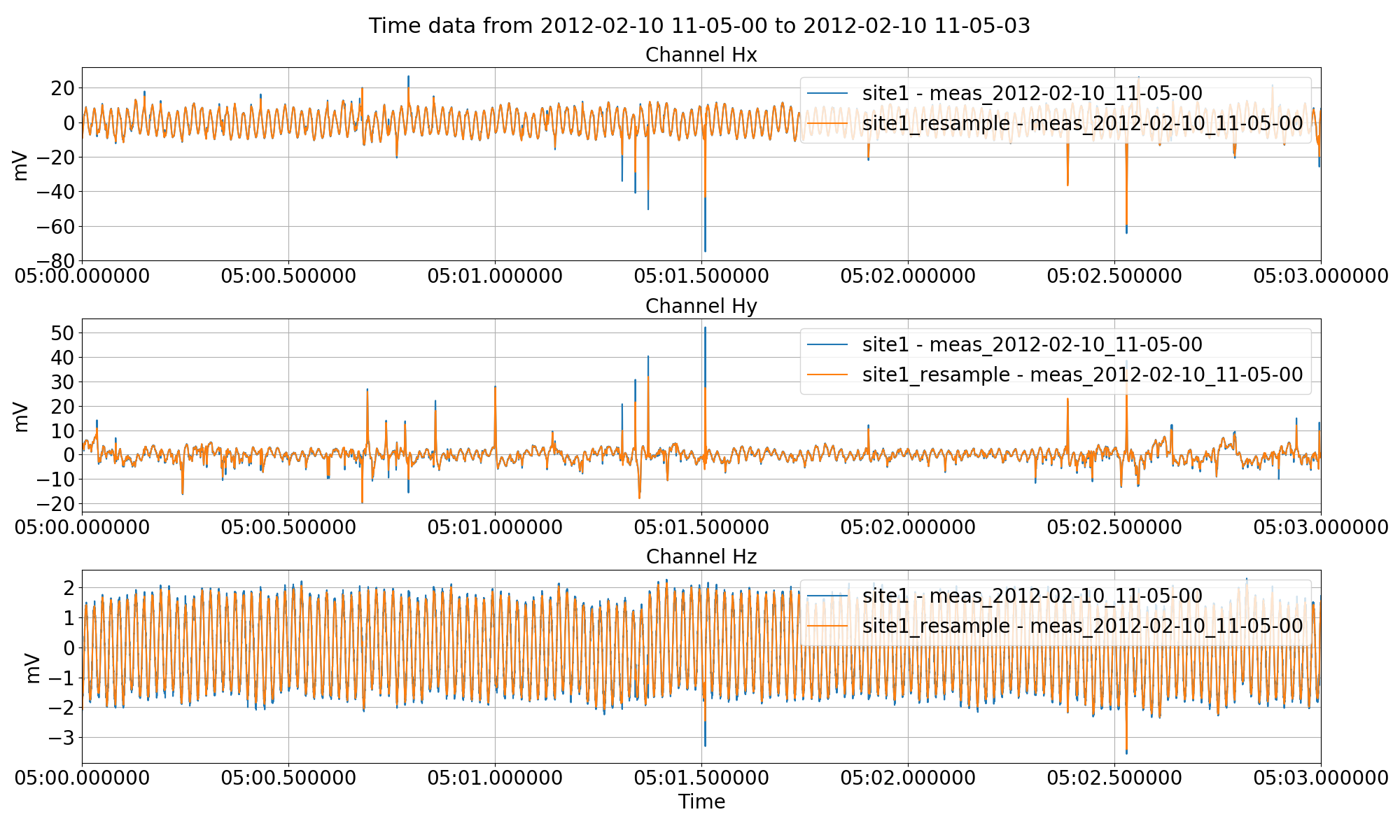 This simply multiples the requested channels by -1. This is particularly useful when electric channels have been connected in the opposite way. An example is shown below of the polarity reversal of an electric channel.

The results of this can be seen in the following figure. 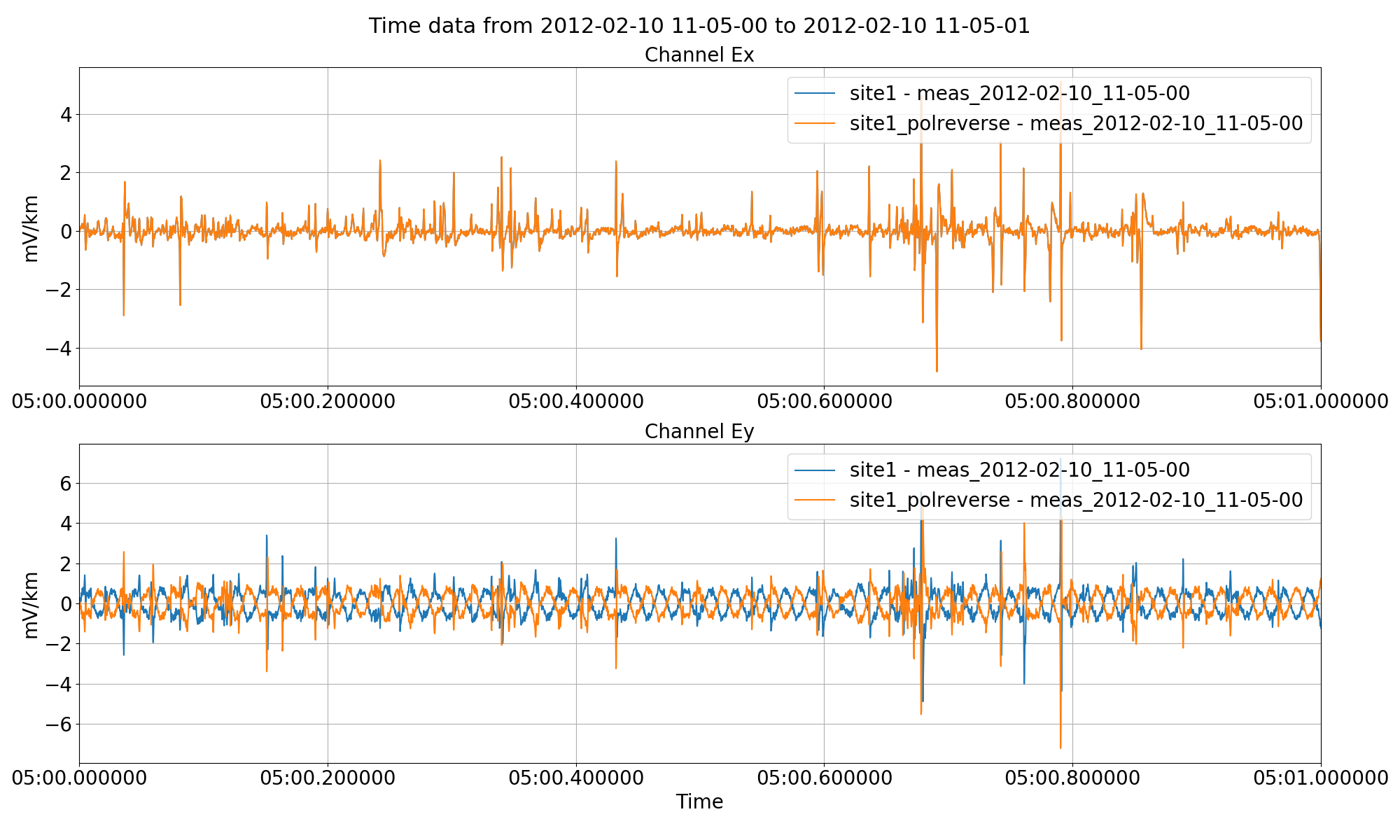 If more arbitrary scaling control is required than simply multiplying by -1, the scale option of preProcess() can be used. 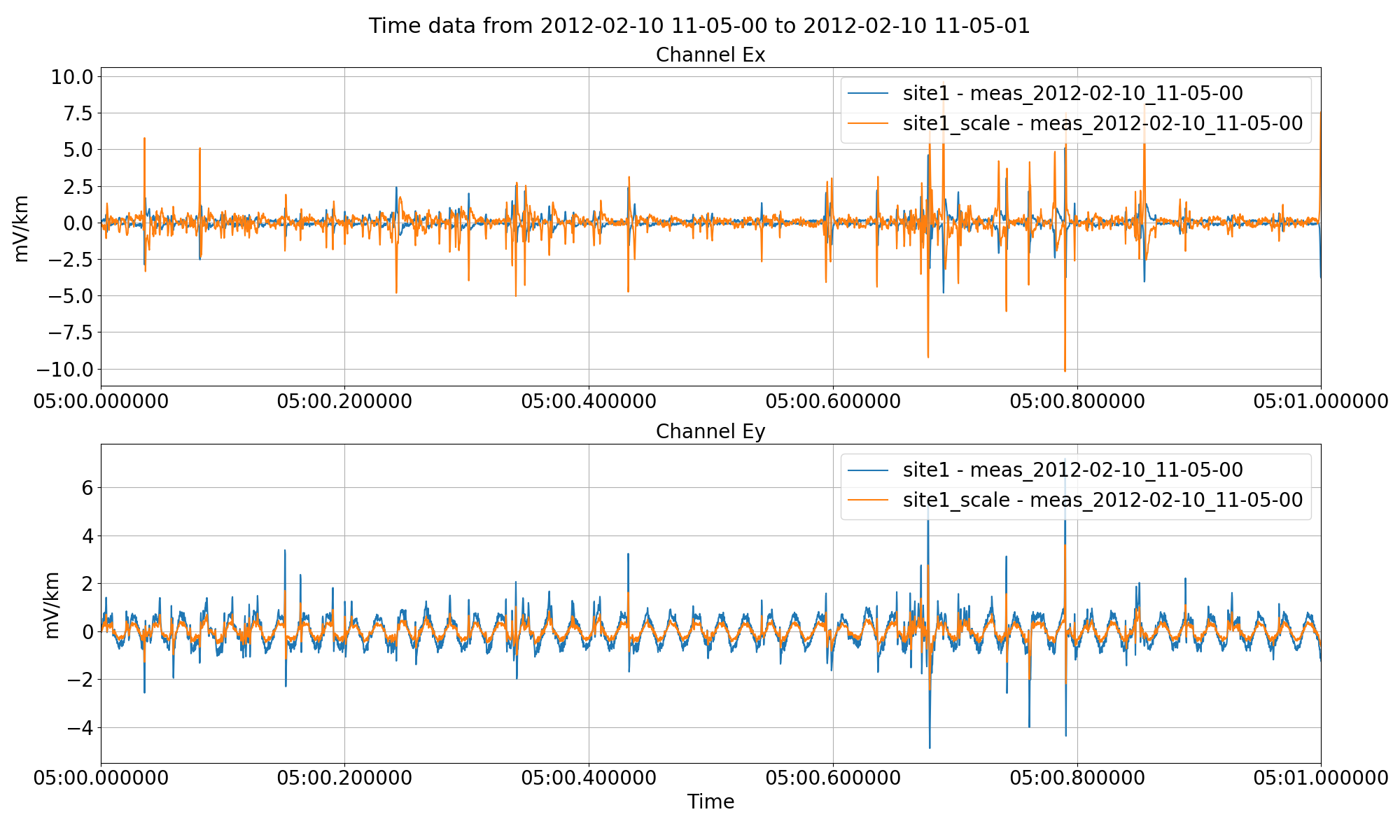 Scaling channel Ex by -2 and Ey by 0.5 using the scale option of the preProcess() method.¶

Below is an example of calibrating time series:

This will calibrate the magnetic channels in the data, converting them from mV to nT. 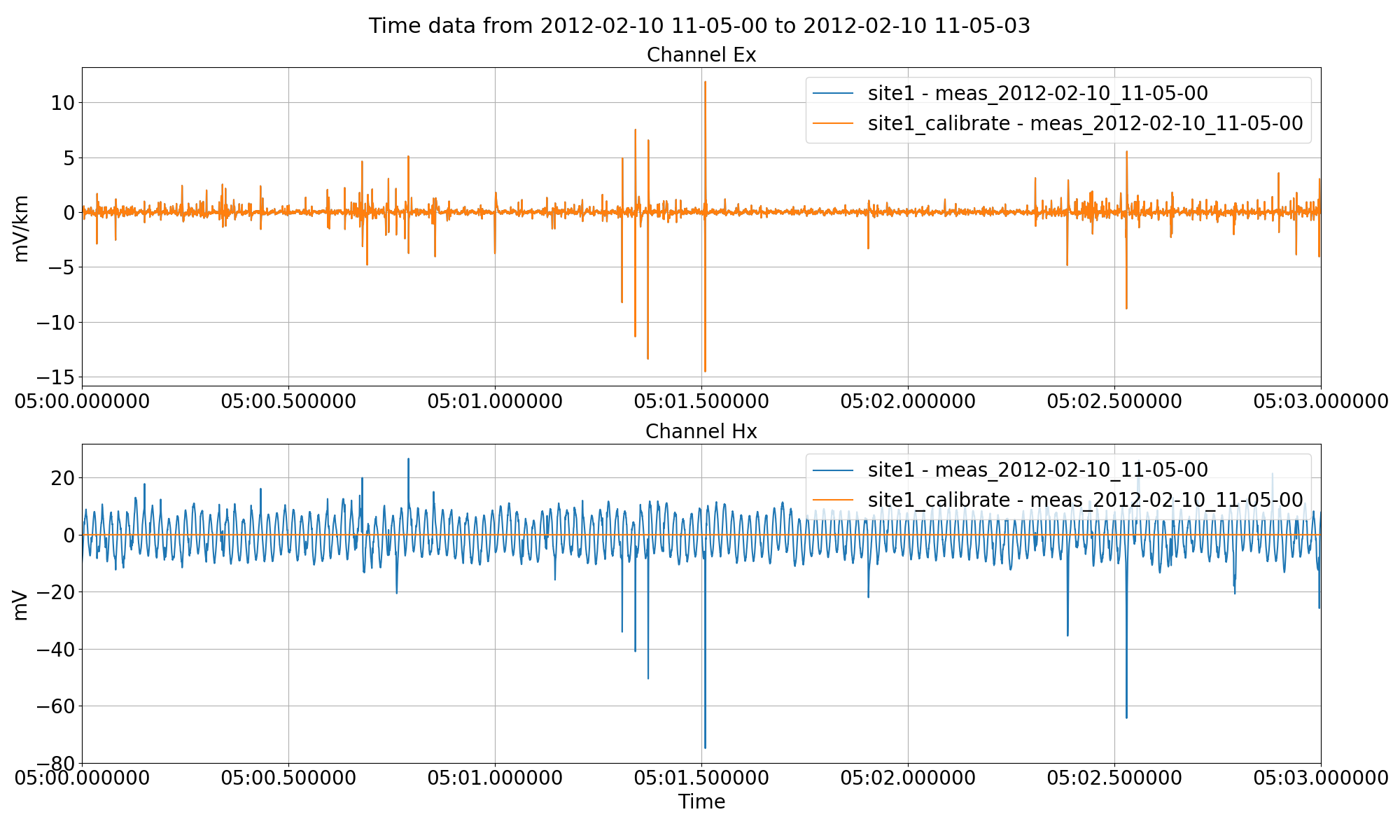 Calibrating the magnetic channels of the data using the calibration option of the preProcess() method.¶

Time series data can be low, band and high pass filtered as required. This normally useful for viewing but can be useful for exporting or other purposes. Filter options can be specified in Hz using the filter keyword to the preProcess() method. The keyword expects a dictionary with various filter options such as:

Examples of each are provided below. 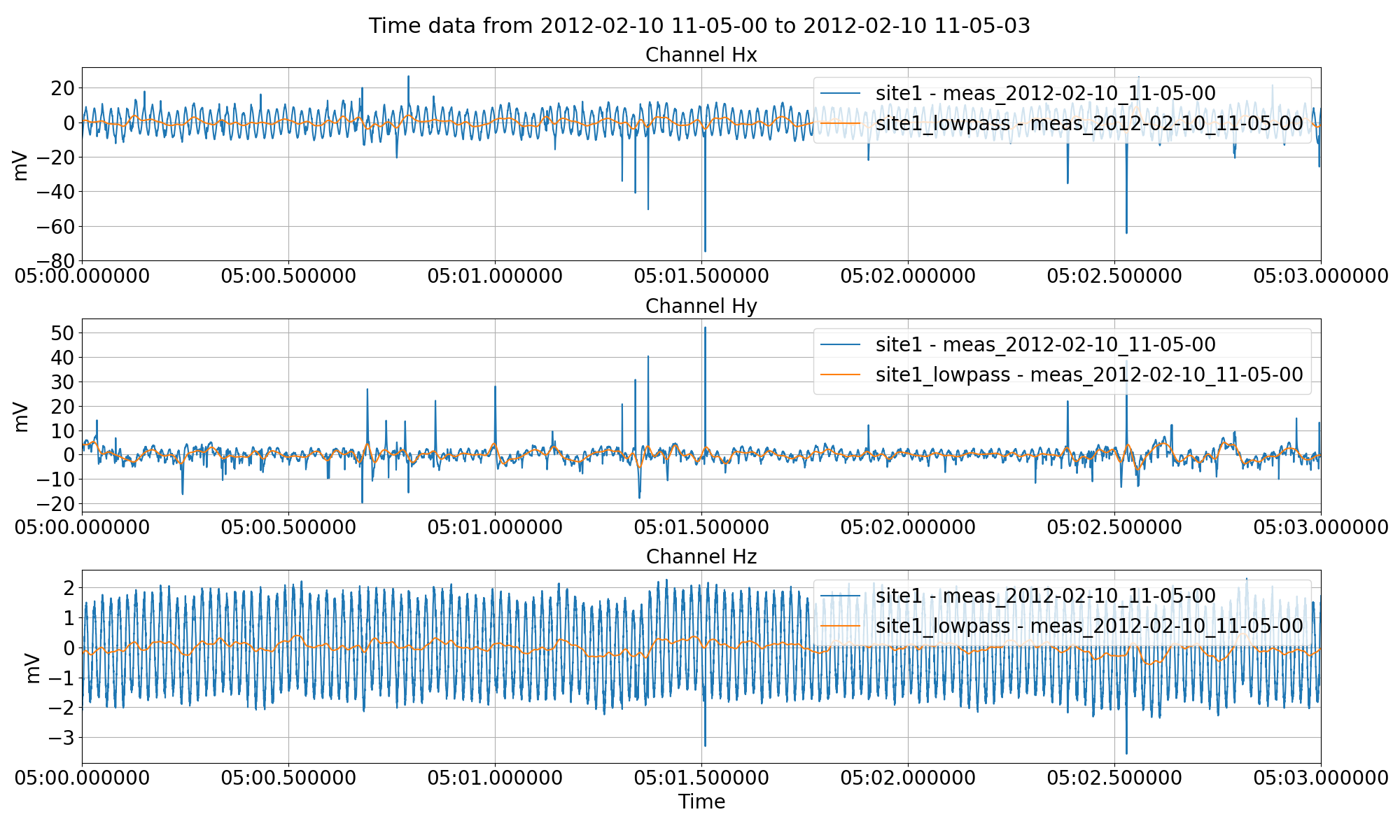 Low pass filtering the time series data and saving it out to another site using the filter keyword to the preProcess() method.¶

Highpass filtering can be specified in a similar way. 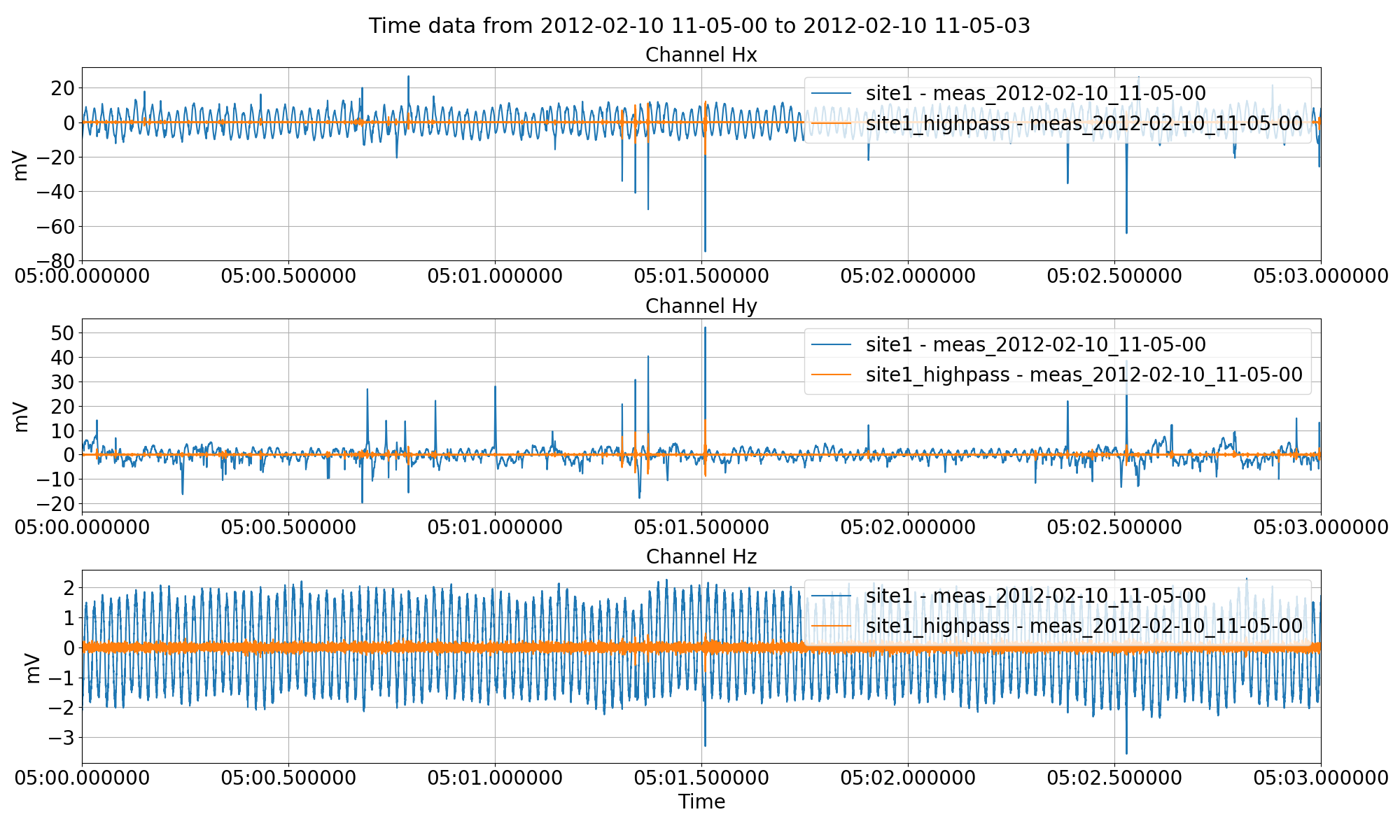 High pass filtering the time series data and saving it out to another site using the filter keyword to the preProcess() method.¶ 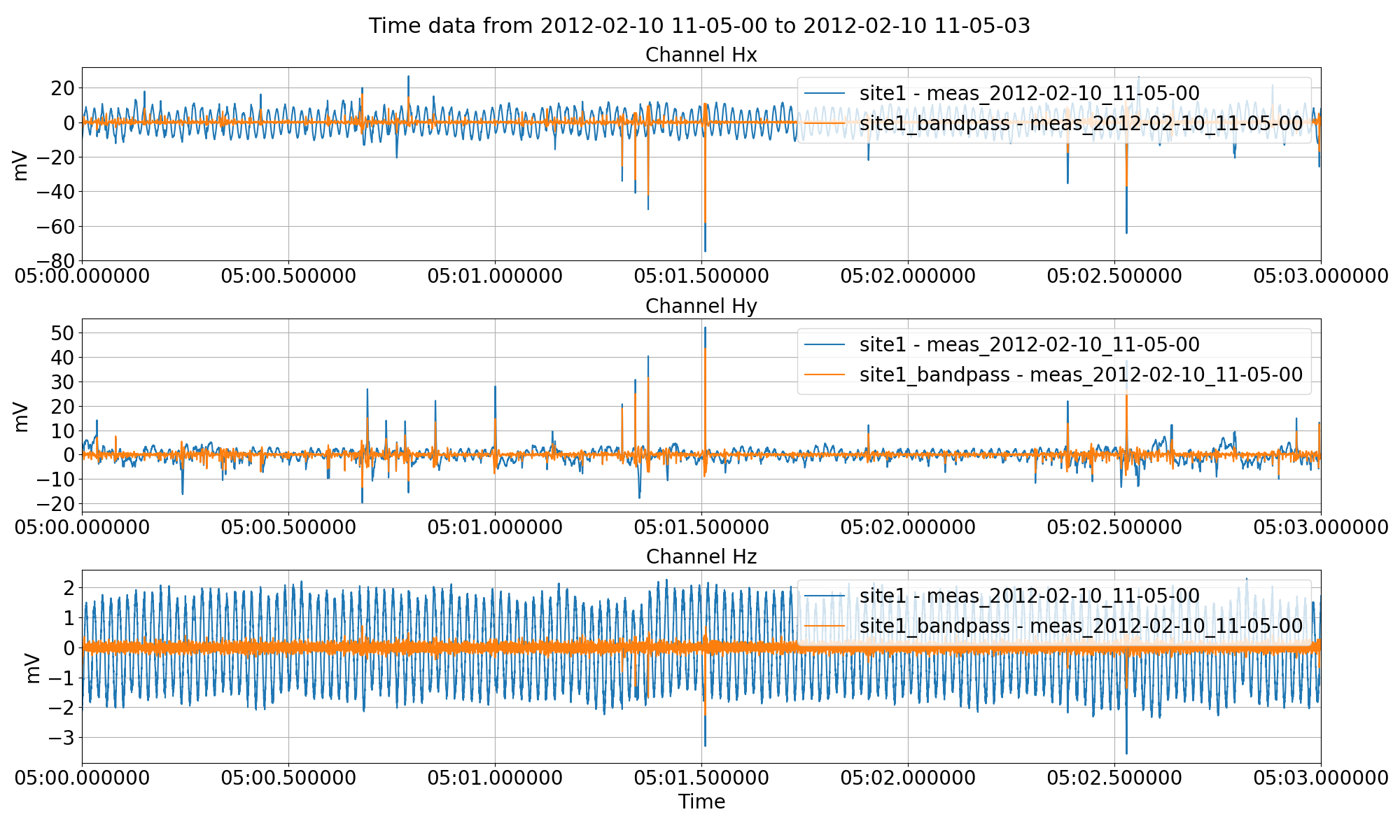 Band pass filtering the time series data and saving it out to another site using the filter keyword to the preProcess() method. Unlike high pass or low pass filtering, two frequencies need to provided, one defining the low cut and the other, the high cut.¶

Notch filters are useful ways to remove unwanted signal in data. The most common frequency domain noise spikes which may need filtering are powerline noise or railway noise at 50 Hz and 16.6 Hz respectively. Notching frequencies are specified in Hz using the notch keyword to the preProcess() method. This is expected to be a list of frequencies to notch in Hz.

An example is given below of removing 50 Hz from time series data. 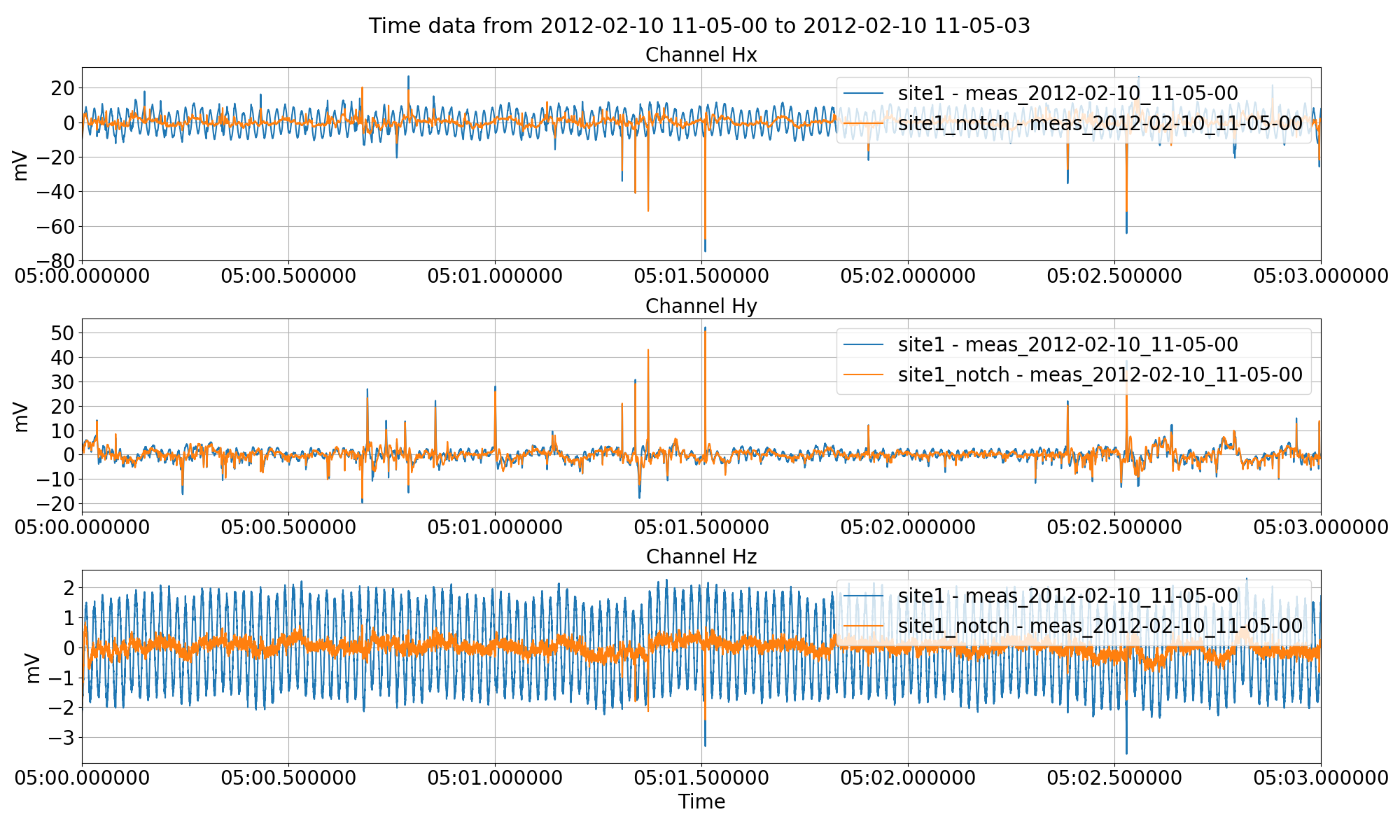 Notch filtering the time series data and saving it out to another site using the notch keyword to the preProcess() method.¶

Data normalisation normalises the data by diving by the norm of the data as calculated by numpy norm. There are few practical uses for this, though it may be of interest for other analytics based on the time series data. 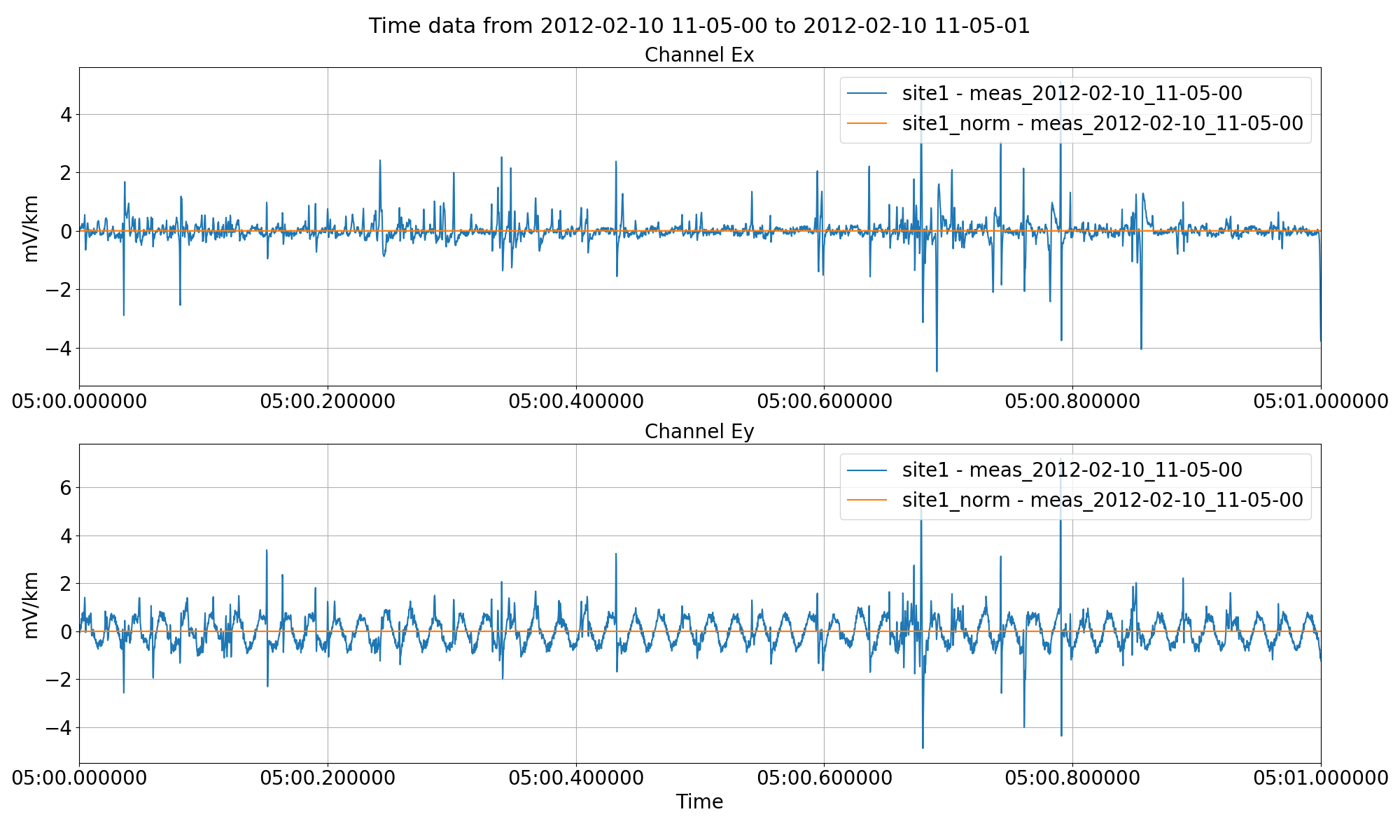 Normalising the time series data and saving it out to another site using the normalise keyword to the preProcess() method.¶

Resistics assumes that data is sampled on the second. For more information on this, please see time series formats and interpolation to second.

In some situations, it is beneficial to stitch together two separate time series to increase the number of windows at long periods. This can be done through gap filling. However, resistics gap filling is external to the preProcess() method and has to be specified using other APIs.

To see an example, begin by saving smaller pieces of data from site1. Here, two smaller subsets are being saved to the same site, “site1_gaps”. To understand more about data readers in resistics, please see time series formats. 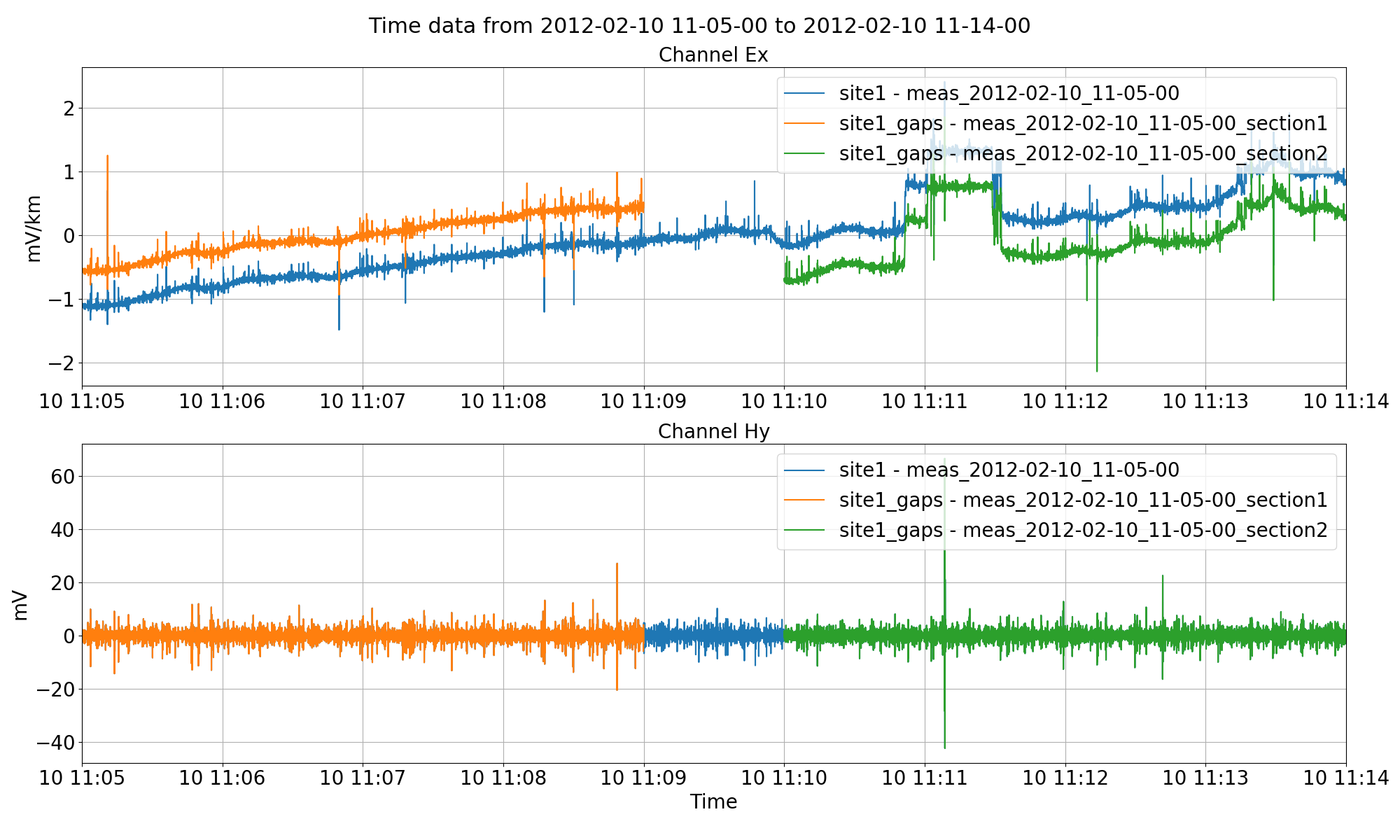 Splitting up site1 data into two smaller measurements in a new site named “site1_gaps”. Note, for the electric channel, the data does not sit on top of each other because the mean is being removed from all the measurements independently for visualisation.¶

It is important at this stage not to remove the mean when getting the time data. Removing the mean will remove separate means for the independent sub time series as can be seen in the above figure. Mean is removed automatically for visualisation when using the viewTime() method. However, by specifying when getting the time data that remaverage=False, the underlying data will still have the original average when written out.

The next stage is to read the separate data in as TimeData objects by using the TimeReaderInternal class.

The two separate datasets can be stitched together using the fillGap() method of module interp.

The filled time data can be viewed using the view() method of the TimeData class. 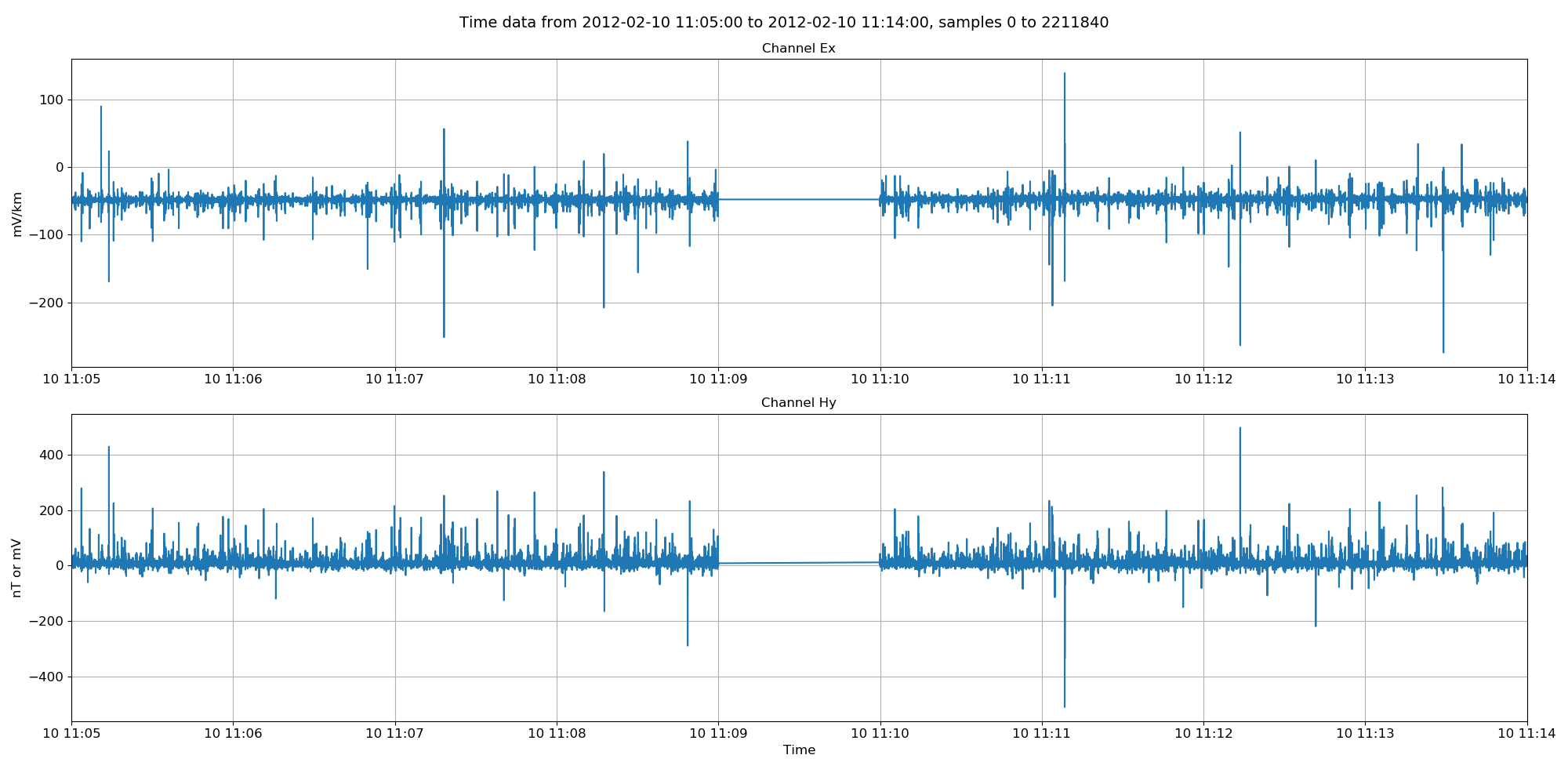 The filled time data. The missing points have now been filled in linearly between the two datasets. Note, this data is not low pass filtered like in the previous plot.¶

Now the data can be written out using the TimeWriterInternal class.

Finally, view the new site with filled time data compared to the original. 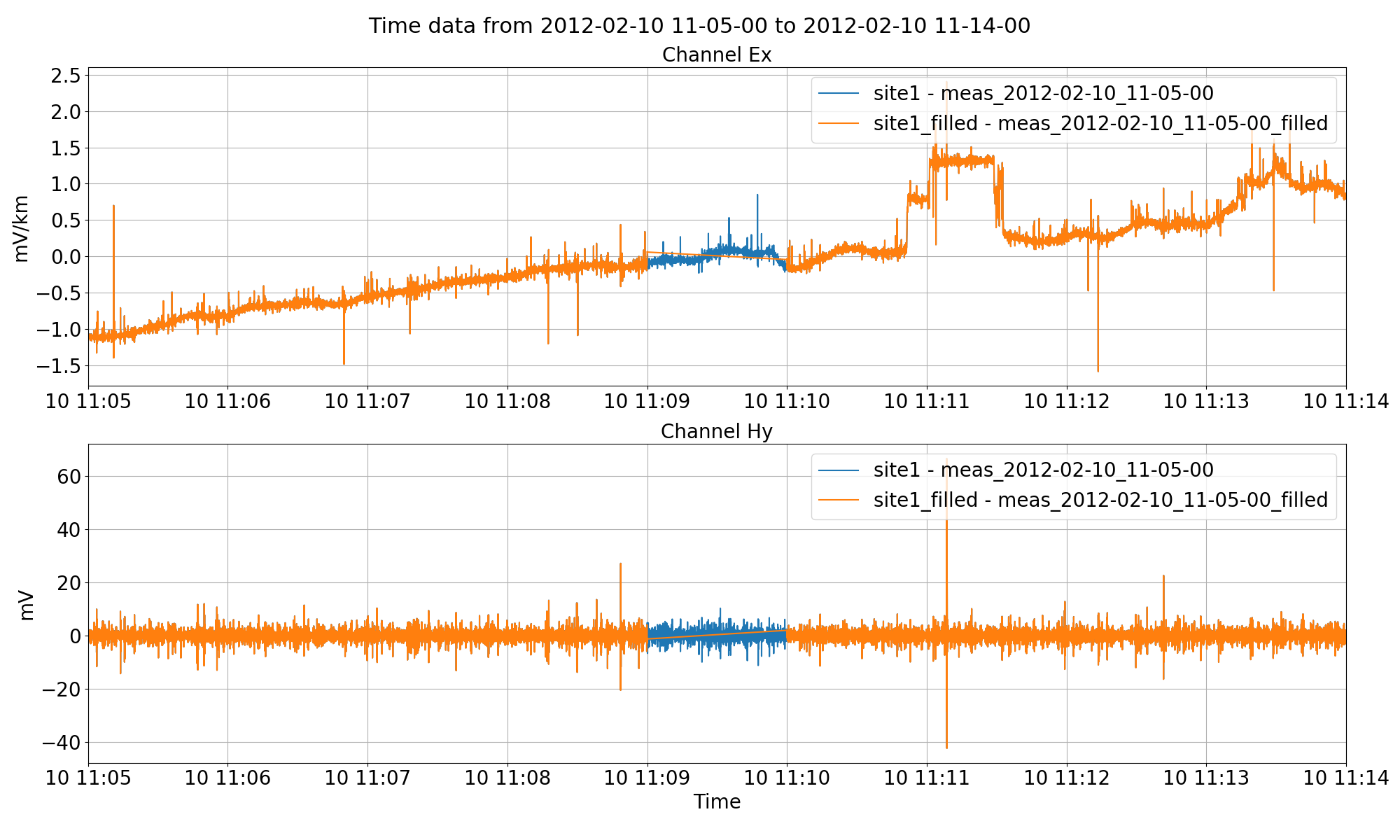 The filled time data in the new site “site1_filled”. By not removing the average throughout all the steps, the sticthed together data faithfully represents the original.¶

For a better understanding of the processing sequence, it is possible to look at the comments file (dataset history) of the sticthed data.

For the purposes of clarity, the complete example scripts are provided below.